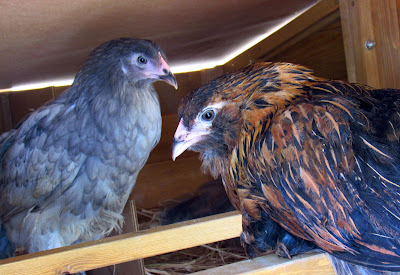 Another piece of the farmstead has fallen into place with the arrival of our hens. We had a coop, but I was having a hard time finding chicks because of the pandemic. Being new to this I assumed that was the way I had to go. Not so! I put out a query on our community google group, and got several great suggestions (there are many, many chicken owners in La Honda).

Since we are getting a late start and had no particular attachment to the "babies under lights" phase of chicken parenthood, we were glad to be reminded that ready-for-the-coop pullets (teenage chickens) was an option. So we could actually be chicken parents by Solstice weekend!

First, we needed to get the coop ready. I leveled the area and put down a double layer of greenhouse barrier and several inches of gravel. Getting everything level, square and solid is tricky, as the whole coop structure is rather flexible, but so far this is working well. 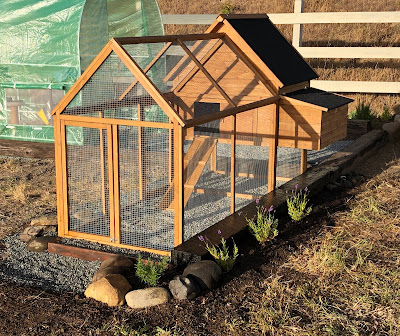 Ready for residents! It feels solid and it looks pretty. The lavender and rosemary continue our garden theme (and are well-suited for this area). The planned chicken yard will secure it further.

Before getting our girls we visited Peninsula Feed Store in Redwood City to get a waterer, a feeder, feed and bedding. They were super nice and very knowledgeable, and helped us find exactly what we needed. 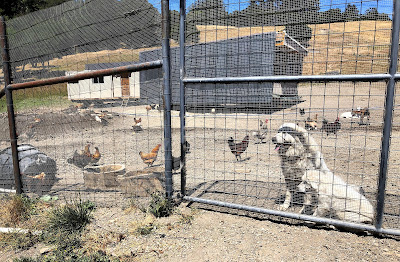 So, FINALLY we could go get the chickens! We decided to, once again, shop "hyper local" and get our pullets from Twisted Fields Farm in nearby San Gregorio.

Twisted Fields has been in operation since 2016, and is in the process of revitalizing a small gem of a farm, tucked in one of the coastal redwood valleys we can see from our porch. They sell organic eggs and goat-milk products to local stores, and their chicken/goat yard is enormous. It also has the most charming pair of guard dogs!

We had our pick from a large flock of youngsters; we just waded in and let chance decide who would be the lucky new residents at Uphill House. Then, after chatting with the owners and grazing on fresh strawberries, we took four chickens and a carton of wild plums back up the hill.

The girls did NOT think much of the car ride. 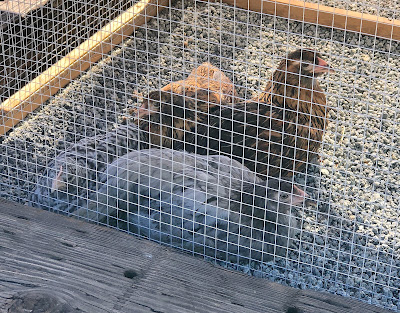 We got home late afternoon, just in time for a long, warm sunset. Our little flock huddled in the corner for quite some time. They had lived mostly in a barn, and I'm sure the bright, airy coop was quite a shock. I liked that they protected the smallest one, who is still in the "peeping" stage. I'm not an expert on ages, but the two largest are weeks to months older than the two youngest. I'll know more as they grow. I covered the run with some shade cloth, put our Steely Dan mix on Pandora and sat back to observe them. 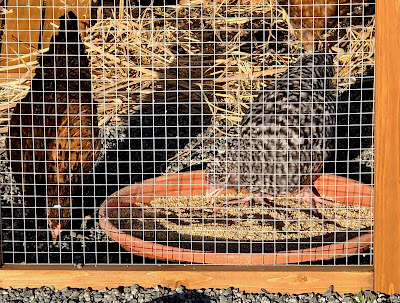 Pretty soon they were doing chicken-y things, found their food dish, scratched around in the straw, drank water. Instant chickens! But still with a lot of growing to do. It's interesting to watch their personalities emerge - I'll introduce each at the end. I have friends who sit with their chickens in the evening, now I understand why. 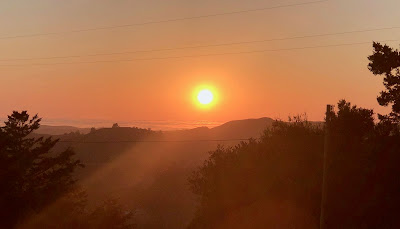 Solstice sunset! This is as far north as the sun will go. Now we will start to swing back again. Gee, I wonder what the rest of the year will bring? So thankful to have a comforting thing like chickens to occupy part of my mind, to balance everything else. It is a nice addition to our days. 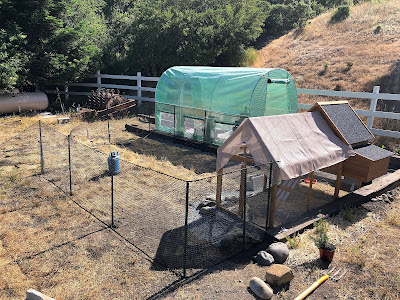 The finishing touch! After many hours pondering exactly what I wanted for a chicken yard, yesterday was the day. Seriously, the particulars have changed so many times. The basics were easy: a protected place for the hens to do what they like best; scratch around in the dirt. It did not have to be tall or have a roof, but shade and shelter would be good. 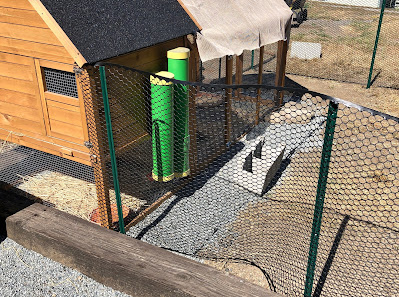 That being established, this is what I chose: a sturdy, black plastic version of classic chicken wire, 3' tall, and 4' steel u-posts. And I am VERY pleased with the choice. Since I'm building this myself, I'm using the strongest AND most economical materials I can find. Total cost for 50 feet of fence was $128. I'll be building 3 simple gates, including a double one here.

Oh, and you can also dig on my no-waste PVC pipe feeder and waterer from Rugged Ranch. Even thought I still put some feed in their floor dish, it's nice to know they have a steady, clean supply at all times. They were kind of a pain to install, but once in they seem rock solid. 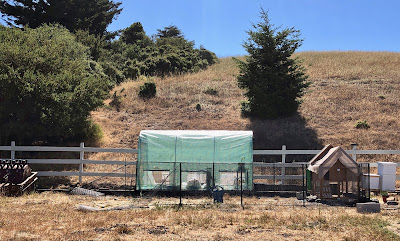 Yes, I'm obsessed with lining things up, but just look at how nice it looks when you do. And YET AGAIN the transparency theme prevails! I thought for sure the chicken fence would have a heavier vibe, but it just doesn't.

I was pleased at how quickly it came together. I had worried that the rock-hard ground would make setting the posts difficult, but a system of small starter holes filled with water worked like a dream, and I was able to set all 14 with a rubber mallet and live to tell about it. The fence posts, with their built-in hooks were great - I could assemble the whole thing before committing to a single zip-tie. 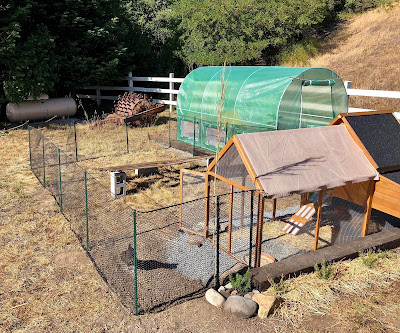 By early afternoon the perimeter was secured, one gate was in place, and I used that old stake truck panel I found to make a shelter, propping it up with cinderblocks. It was time to let the girls check it out! 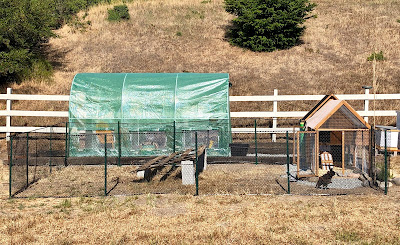 If we expected an immediate stampede once the doors were open, we didn't get one...but they were definitely curious! I'm super happy with the way this turned out. I might add some sort of screening fence along the front side; the wind off the ocean can come in pretty brisk sometimes, and it would be nice to protect the yard a bit. Maybe willow?

This morning it was chilly and foggy (as it often is) but the girls were up at first light and ready to explore their new yard. And now, without further ado, meet the Uphill Flock. 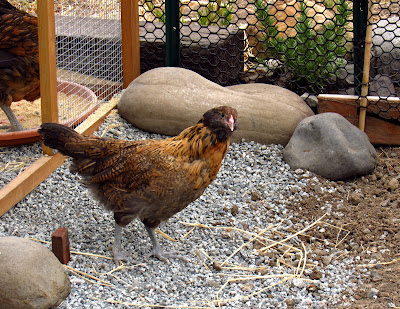 This is Little Brown Betty. I have no idea what kind she is, but her feathers are already just beautiful. She's quite sweet and docile, but unfortunately is getting picked on a bit, and as a result Betty is rather a loner. She was the first to figure out the new feeder and waterer, and is probably the one who will bond with us most. 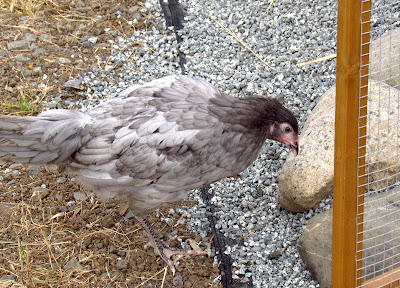 This is Pearl. She is one of the two older and larger pullets we chose. Her colors are beautiful too! She also likes her privacy, and was the first to find the coop. She might be a Blue Andalusian. 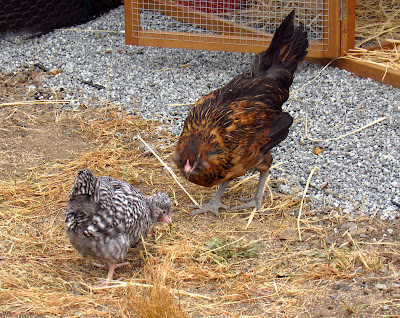 Finally, here are Lursa and Gracie, who have set themselves up as the leaders of the flock. It's hilarious. Gracie is the smallest and youngest, maybe 7 or 8 weeks old. Lursa is the largest and oldest. We both think she looks Klingon, and because we are proper Trekkies she is named for one. So far, it fits - she's fierce!

Gracie, who started as a fearful peeper is the one who is doing much of the bullying around here; the pecking order is being established. Hopefully they will work things out, now that they have more space. 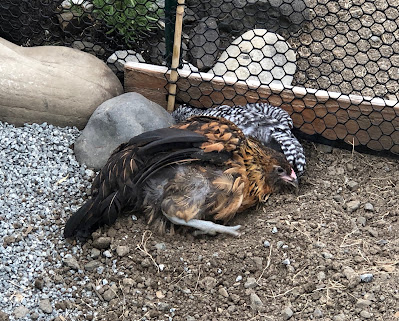 I never knew dust baths were such a thing for chickens, but they are having a great time. Making space for creatures that works well for their needs is so satisfying.

That's it for now. I need to go finish the gates. As always, thanks for following along. We've accomplished much since April, time to let it all settle in. Now more than ever it is important to care for self and others, stay centered, and observe with a clear eye. While looking for just the right way add some light.

Posted by Laura Livengood at 3:51 PM 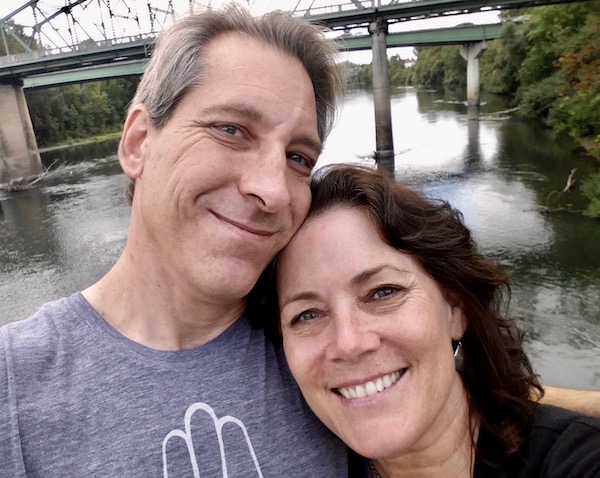 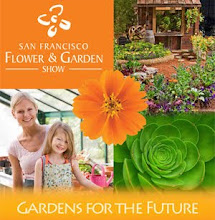 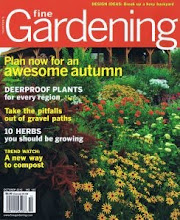